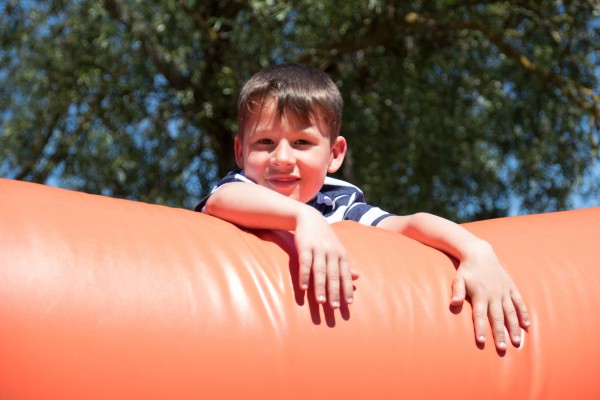 Pub landlord fined and given curfew for dangerous inflatable

Flintshire County Council Environmental Health Officers successfully prosecuted Mr Ian Freeman of the Black Horse Inn, Mold Road, Buckley for the use of a dangerous large inflatable slide at the rear of the premises in May 2012.

Upon inspection of the slide a Health and Safety Prohibition Notice was served on the grounds that there were significant concerns for the safety of children using the slide and for people nearby.

The large commercial inflatable slide, similar to those found at fairgrounds, was found to be in a dangerous state. The seams were badly worn and splitting and could fail at any time, causing a child to fall through. If this happened on the top bed of the slide, children could have fallen nearly 4 metres (13 feet) to the ground, or worse, internal bed ties could come away from the bed stitching, potentially launching a child up into the air to fall from an even greater height onto whatever might be below.

The slide was not anchored down and there were not enough anchor points on the slide; most of the ones that were there were in poor repair and faulty. This means that with windy conditions there would be a high risk of the inflatable blowing away, injuring users and innocent bystanders.Other safety failings included the lack of matting in front of the slide, unguarded access to the blower fan blades and the rope ladder was loose at the bottom creating risk of strangulation. The slide had been poorly repaired, patched and maintained, creating finger entrapments, sharp edges and numerous holes in bed areas and walls.

To render the slide harmless, officers destroyed the slide by incision and cutting it into sections for removal from site and disposal to landfill.

Mr Freeman pleaded guilty and was given a community sentence, a three month curfew between the hours of 8 pm to 6 am at Mold Magistrates court on 25 April 2013 and ordered to pay £1800 costs.